“Mustang is one of few places in the Himalayan region that has been able to retail its traditional Tibetan Culture unmolested ……… authentic Tibetan culture now survives only in exile and a few places like Mustang, which have had long historical and cultural ties with Tibet.” – The Dalai Lama

Around Upper Mustang, there are many caves such as those of Nyphu , Yara, Chossar, Tange and Drakmar. Chosar Cave was founded in 800 BC, with more than forty chambers. Anthropologist found 13th century paintings and manuscripts executed in silver and gold in the Mahzhong cave. We can find frescoes painted by Newari artist in the 12th century. 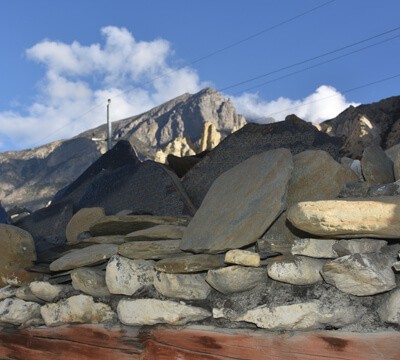 If you are planning to Trekking to Upper Mustang then you have to issue Special permit by Nepal Immigration with showing your original passport and Nepal visa.

Lo Manthang was founded in 1380 by Ame Pal who was constructed city wall and any of the still standing structure. The main attraction of Upper Mustang Trek is Lo Manthang which is remaining wall city in Nepal and Chortens of Lo Manthang house relics of the Buddha. Royal Palace is four stores and made by King Jigme Dorje Dradul in 1440.

Baragaunle People: These people live south of upper mustang and north of Thakali people which villages name are Kagbeni and Muktinath. Their house is similar to Upper Mustang people built by mud and poorly ventilated. Their clothing is same like Upper Mustang people, Tibetan style and often brightly colored. The Baragaun village’s people follow Tibetan Buddhism with some Bon influences.
Lopa People: The Lopa people of Mustang lives in mud brick homes that are whitewashed on the outside and decorated on the inside, much like Tibetan homes. The Lopa People traditionally traded with Tibet but in the mid of eighteenth century the Thakalis to the south were granted a monopoly on the salt trade. They follow Tibetan Buddhism and marriages by parental agreement and capture and elopement.

The Teeji/Tiji Festival comes from the words Ten Che : meaning the hope of Buddha Dharma and celebrated three day ritual known as The Chasing of the Demons which focus on a local myth that tells of a deity named Dorje Jono who must battle against his demon father Dorje Sonnu to save the Kingdom of Mustang from destruction. The demon father wrecked large number destruction on the kingdom by creating a shortage of drinking water, which causes all sorts of disasters including famine and animal. Dorje Jono beats the demon and banishes him from the land and save the communities. They perform mask dances and praying . If you want to experience Teeji Festival and let know about fixed date, please book the Tiji Festival Trek through local company in Nepal asking date of Tiji festival.

Himalayan Asia Treks and Expedition P Ltd is an ideal partner when it comes to trekking Packages in Nepal/Nepal Tour Packages or any other any tourism activities in Nepal, Bhutan and Tibet. The company was established in 2004 AD by individuals who have spent an entire life working as guides, for mountaineers and as well as trekkers. We know exactly what makes or breaks a trek. One of the best things about us is that we focus on client satisfaction. And in order to achieve that, we even allow our clients to make changes to the itinerary. If you’re planning to go on the Nepal Trekking Packages/Nepal Tour Packages, and are looking for a travel service provider, make sure to choose Himalayan Asia Treks and Expedition P Ltd. The one thing that is certain is, with us beside you; you can get the best out of the Nepal Trekking Packages/Nepal Tour Packages including Bhutan and Tibet.

Our award-winning adventure holidays are carefully designed to help you escape the rat-race, whether it's a quick weekend or a longer trip. We invite brilliant local guides and hosts to put them on, and support conservation with every booking.